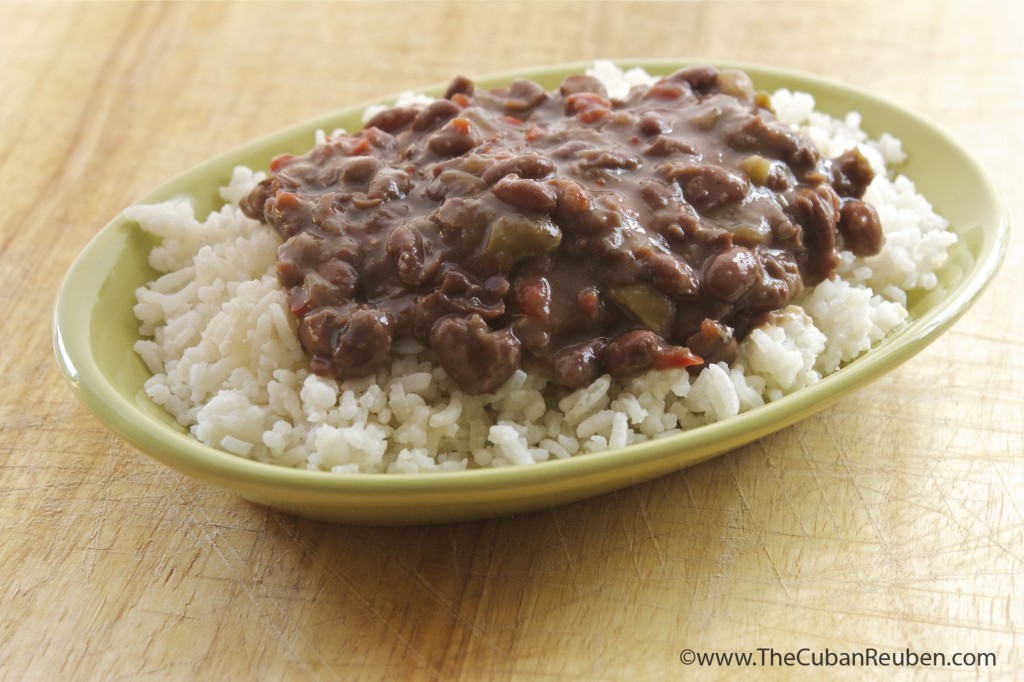 This past weekend, Kenny and I hosted some friends for a casual Cuban-themed dinner party at our home. Despite never having met each other, we thought that the two pairs might find some common ground for a couple of reasons.  First, they are both active leaders within the global Jewish community, and second, they share our appreciation for all things food. As their token Cuban friend, I felt a great responsibility to present the best of the best that my family has to offer, and my plan was to pull out all the stops. After all, when each individually asked me where they could find the best Cuban food in town, I boasted that no restaurant could produce the dishes made with love by any of the cooks in my family. So the bar was set pretty high.

As our date approached, I thought long and hard about what I might include on the menu. The Cubans in my family, much like the Jewish people at large, are known for cooking in abundance. It’s as if we’re incapable of cooking just enough. There must be plenty in case people want seconds. With this in mind, I knew which staple was not to be missed for my Cuban feast: Black Beans. Although a bit labor-intensive and time consuming to prepare, a single bag of beans makes a pot big enough to feed a small, hungry army. Also, the flavor you get from popping the top off a can of beans is no match for the slow-cooked, smokey, warm bite from the made-from-scratch variety. That being said, making beans from scratch is a serious commitment. To do them right, it takes two days of prep, which isn’t ordinarily my deal. But trust me when I tell you that if you’ve got the time, it’s totally worth it.

The evening before the dinner party, Kenny got to work organizing the perfect soundtrack for the night, while I soaked the beans in a giant bowl of water. I left them to soak overnight, and in the morning, my beans had softened a bit, making it easier to pick out any rocks that made their way into the bag. My handy dandy upper-cabinet-reacher, also known as my husband, graciously pulled down my pressure cooker, and I filled it with classic Cuban aromatics: garlic, onions, and bell pepper. I covered the beans with chicken stock, and threw in some bay leaves for extra love. Next, I let the pressure cooker do its thing, and awaited it’s solo. Once the cooker started to sing to me, I started the clock. Forty minutes later, the beans were ready for the next step.

I am really good about doing the bulk of my prep work ahead of time on dinner party nights, mostly because I want to be able to enjoy myself with my guests. So, I had already prepared the sofrito that would be the base of the flavor profile in the beans. I let the sofrito of finely chopped garlic, onions, and bell pepper sweat, and then added the soft beans. You can’t have a pot of Cuban beans without the star: cumin. Cumin is what gives it that warm, smokey flavor without the kick of heat. After adding in a little oregano, salt and pepper, I was almost done. Cuban cuisine, much like its culture, is very much influenced both by the African and the Spanish people who inhabited the island long ago. This cross-section is ever apparent, particularly in beans, when we add sliced green olives. I could be wrong, but I don’t know of any other cultures that do that.

Once the beans were simmering, I was free to move on to some of the other offerings of the night, and I wrapped up just as the guests started to arrive. Our home is sometimes hard to find, but they followed the scents of garlic and cumin wafting through the air, and the sounds of Arturo Sandoval and Celia Cruz serenading in the background. Dahlia and Elan brought us some fragrant mint from their garden, and with that, the mojitos were flowing.

Like the good hostess my matriarchs taught me to be, I wore a flower in my hair for good measure, and set out some appetizers while I finished up in the kitchen. As they got to know each other, Dahlia and Elan learned that they shared many more things in common with Jill and Ely than initially expected, and I could hear their stories and laughter from the kitchen. Shortly thereafter, I set out the dinner spread, and we sat down to eat. The feast included appetizers of sweet and savory pastelitos de pollo and Cuban crackers with guava paste and cheese. The main course featured my Cuban black beans with white rice,  slow-cooked Ropa Vieja, succulent rotisserie Pollo Criollo with Mojo sauce, crisp, twice-fried tostones, and a salad layered with avocado, flower-shaped cucumber, thin slices of tomato and mixed greens. To cap off the evening, I served my famous flan.

Each bite of the meal was met with happy sounds of appreciation, the kind that make my heart sing. I taught my friends that Cubans eat their rice and beans the way Americans eat their mashed potatoes and gravy. That’s how we can tell the real Cubans from the impostors at the Cuban restaurants. That night, my friends learned a little something new about me, too.The food I served was indicative of my unique family history. I love to cook, but the part I love most is sharing that passion with my friends and loved ones.

Especially when they’re as fun and goofy as these party guests.

Author:
TheCubanReuben.com
Recipe type: Side Dish
Cuisine: Cuban
Serves: 16+
Prep time: 10 hours
Cook time: 2 hours
Total time: 12 hours
Print
Ingredients
Instructions
(This recipe is done in 3 distinct steps)
Step 1:
Step 2:
Step 3:
Notes
If you do not own a pressure cooker, use a regular big pot, and cook on the stove for 3+ hours, until the beans are soft.
3.2.1255

If you live anywhere near southern California, then you know that the best bakery in town is Porto’s. This family-owned Cuban bakery specializes in everything from decadent confections and savory sandwiches, to picadillo-stuffed potato balls (my husband’s favorite) and the moistest, most egg-y challah this side of the Mississippi.Yes, you read that right. The best challah in town can be found at the Cuban bakery. No matter the time of day, there are always long lines filled with people aching to get their pastry fix. Sure, Porto’s carries the classic pastries familiar to their clientele, but if you want to get something authentic to their Cuban baking traditions, there is one obvious choice: The Refugiado (or Refugee), a delicately flaky strudel, filled with pungent guava and creamy cheese.

I’m pretty sure that my family alone kept Porto’s in business for a good many years, as any life event worth celebrating featured these desserts, which is where I derived my theory on its peculiar name. Guava and cheese is a classically Cuban combination, and one eyes-closed  bite of a Refugiado transports any Cuban native to their motherland.  Essentially, It’s a taste of home, and it’s one that I desperately wanted to replicate in my new hamantaschen recipe.

My husband and I have been known to hop the Purim carnivals in town, searching for the perfect hamantaschen, so there was a little bit of pressure for me to find just the right recipe. After scouring my stash of cookbooks, and wading through my favorite blogs, I tested 3 different recipes for hamantaschen, but none of them came up to snuff.  I tackled my filling problem relatively quickly. My first batch used guava preserves, which didn’t hold up to the heat, and unceremoniously pooled from the dough. Then, I tried the heartier guava paste, and that seemed to do the trick, but I was still off on the dough. One batch, the dough was too soft, the next, too dry, and so on. Witnessing my flour-fueled displays of frustration (and tasting all three reject batches), my husband finally offered a suggestion: Get in touch with Marci.

Marci is a long-time family friend, who met my mother-in-law through their temple Sisterhood. She was also an official witness at my wedding, and signed the ketubah, which is currently proudly displayed in our living room.  According to my husband, nobody makes better hamantaschen than Marci, and it made sense to me to go straight to the source. When we connected, Marci explained that not even my mother-in-law had this recipe! Which, of course, explains why it was so absent from my combined family cookbook. As soon as Marci generously shared her winning dough recipe, I went to work, and wouldn’t you know it…my husband was right.

I mixed, rolled, cut, and folded this dough with ease, and it baked into perfect little guava and cheese hamantaschen! As a bonus, the recipe makes a ridiculous amount of dough, and I have a bunch left in my fridge, so I can play around with other filling options, soon. 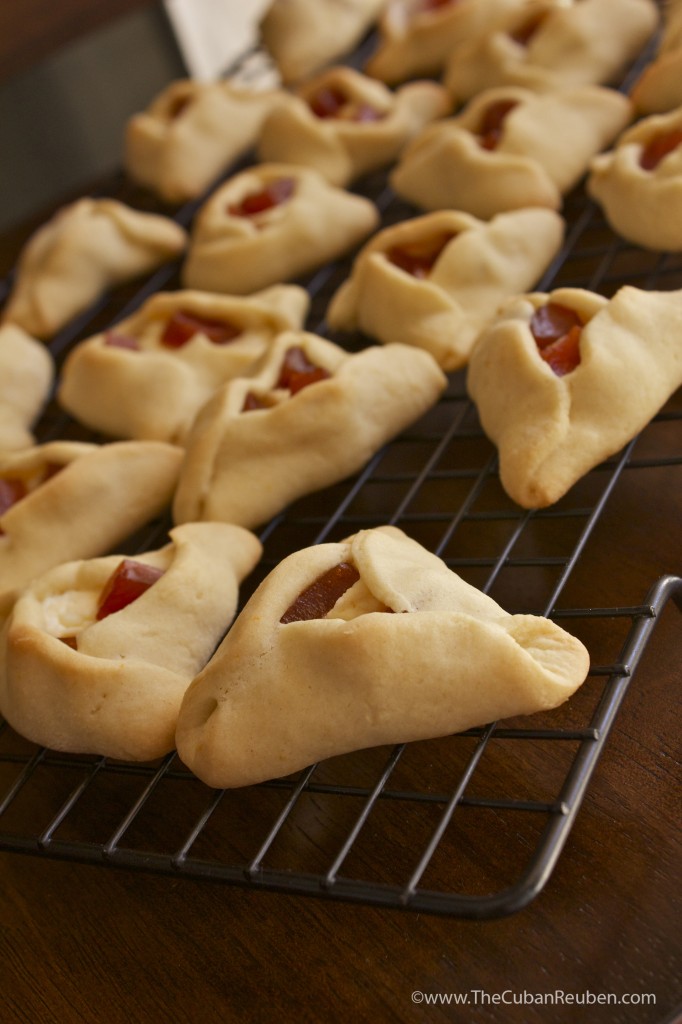 5.0 from 2 reviews
Guava and Cheese Hamantaschen