For many, father’s day is a time to acknowledge and honor our fathers, and this year, it is particularly meaningful to my family. After my dad, Alan Skobin, survived an emotional battle with a rare form of pancreatic cancer, I am happy and relieved that we get yet another opportunity to celebrate such an extraordinary man.

When life gives my dad lemons, he isn’t the type that is satisfied with making the same old lemonade you can get at any neighborhood stand. He is the one who turns them into world-class lemon meringue pie. He lives by the motto of, “Above and beyond,” and always elevates every moment to the next level. For example, he began his involvement with law enforcement as a teenager in the police explorers program, and many would have stopped there. My dad, however, showed his commitment and loyalty to protecting and serving our community, and through the years, finished as police commissioner. My dad takes this philosophy when it comes to parenting, too. When I attended Northwestern University, he wasn’t content just wearing a purple “Northwestern Dad” t-shirt. Instead, he nearly bought out every Northwestern retailer, so that he could sport purple pride from every inch of his body, every corner of his office, and every crevice of our home. That’s how proud he was.

This mentality and outlook on life is also the reason why my dad has so many friends. In fact, my dad is a professional friend collector. Everywhere we go, he’s either making new friends or running into old ones. Years ago, while walking down the streets of Amsterdam on a father-daughter adventure, my dad heard someone in the distance shouting, “Hey, Alan!” Yes, even clear across the world, people look for opportunities to call him out as a friend. His old friends, like my father-in-law, Larry, know that he does anything to bring them joy. Since Larry loves all things Chicago Cubs, my dad once arranged for Larry’s favorite ballplayer, Ernie Banks, to join us for dinner. My dad’s reward was the grin from ear to ear plastered on Larry’s face.

*First published on the “Jewish &” blog at MyJewishLearning.com

The truth is that I am never more thankful for my dad’s army of friends than when he is sick, because as history has shown, they play a significant role in his recovery. A bit of a medical mystery, my dad has beaten the odds countless times due to a combination of outstanding doctors, swift and good decisions, and the thoughts and prayers from his friends and family. I remember one of the earlier times we dealt with one of dad’s medical obstacles. He had recently been diagnosed with an unusual and dangerous brain tumor that needed to be removed, but the surgery presented more risks than we could count. Every step of the way, we were told that he might not survive, and if he did, we should expect a completely different man than we knew and loved. Leading up to the surgery, the phone rang off the hook and the doorbell chimed endlessly, as all of his friends shared their well wishes and prayers for a speedy recovery. Regardless of differing religious beliefs, “We’re praying for you, Alan” replaced good-bye as the normal send off. I don’t know for sure if G-d heard all these prayers and wishes, but my dad sure did, and at recovery’s toughest moments, they reminded him that he was important to many. Miraculously, he recovered from this medical challenge with only minor side effects.

This year, as my dad took on the beast of pancreatic cancer, my brother and I used the powers of social media to alert my dad’s army of supporters about his diagnosis and progress. Ordinarily, we don’t fancy ourselves social media over-sharers, but because prayers and general good thoughts had such significance for my dad with past health issues, we knew it was time to round the masses once again and take the call for prayer and healing to a global scale. With every hospital bed photo or surgical room update we posted, the show of support was astounding. In fact, as my dad awakened from surgery, amazed that he had survived, he groggily exclaimed to my mom, “Can you imagine the power of prayer?” Afterwards, while my dad rested in bed, we read him the online responses, and his spirits lifted as he drifted to sleep.

It takes a village to battle serious health issues, and sometimes those of us who are acutely supporting the sick need lifting, as well. Many friends commented about the way my mother’s devotion to my dad never once waned, and how she stayed with him in the hospital even when it was unclear how long his stay would be. She made the stiff couch in his room her bed, and literally did not leave him unless my brother or I forced her to go outside for some fresh air and a bite to eat. She wanted to make sure he was never alone, and that she could advocate for him when he wasn’t able to do so on his own. This type of support takes both physical and emotional strength, and just as my dad found his through the prayers and well wishes from his friends and family, so did my mom.

My role in all of this was also one of strength, as I shouldered the private emotional venting from my parents and family. While they remained optimistic publicly, privately, they feared the worst. Pancreatic cancer isn’t a walk in the park, and they knew that the road ahead would be bumpy. Like the brain tumor, the odds were always against us. I did my best to hold it together for my family, providing a positive voice of reason and assuring them that we were in the care of some of the best specialists and doctors around, including a Northwestern University alumnus. And when recovery was out of my control, I used food to get the job done. I learned quickly that the way to excellent post-operative care was through the stomachs of the nursing staff, and the day after surgery, I stopped at our favorite Cuban bakery to pick up some of the best pastries this side of Havana.

I also prayed. In the thick of this journey, I found myself seeking comfort in the prayers and traditions of Judaism, and never missed a Shabbat service. One of the most poignant moments of Shabbat for me is when the rabbi goes around the room during the mi shebeirach, or prayer for healing, and the congregants voice the names of those who are ill. At one particular service, I was ready to say my dad’s name, but before the rabbi reached me, I heard his name called by someone across the room. It was at that moment that I felt the power of the prayers reaching me, and for the first time, I had myself a good, ugly cry.

Because of my dad’s army, I understand that his significance goes above and beyond his role as father to my brother and me. He is also a loving and faithful husband to my mom, a wise and caring grandfather to his grandbaby, a giving and honest mentor to those who look up to him, and most of all, a good friend to many. This father’s day, as I reflect on the many lives my dad has touched, I will also remember to include the other men who have played a significant role in my life, and grace them with a good thought or a meaningful prayer. After all, you never know who’s listening. 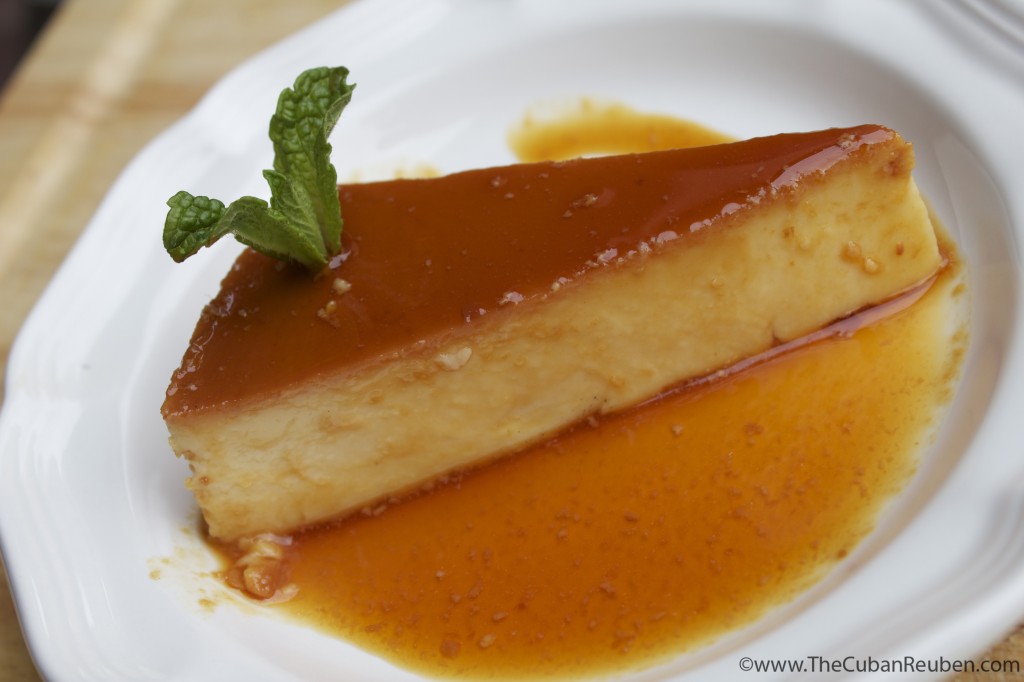 Shavuot is just around the corner, and I see my friends frantically scouring the internet, searching for the perfect dairy-based dish to commemorate the arrival of our ancestors to the land of “Milk and Honey,” and the point in history when the Jewish people were said to have received the torah. It’s funny that we have a holiday whose main highlight is all things dairy, considering how many Jewish friends I have who suffer from lactose-intolerance. Sounds like a cruel joke to me, but I digress. 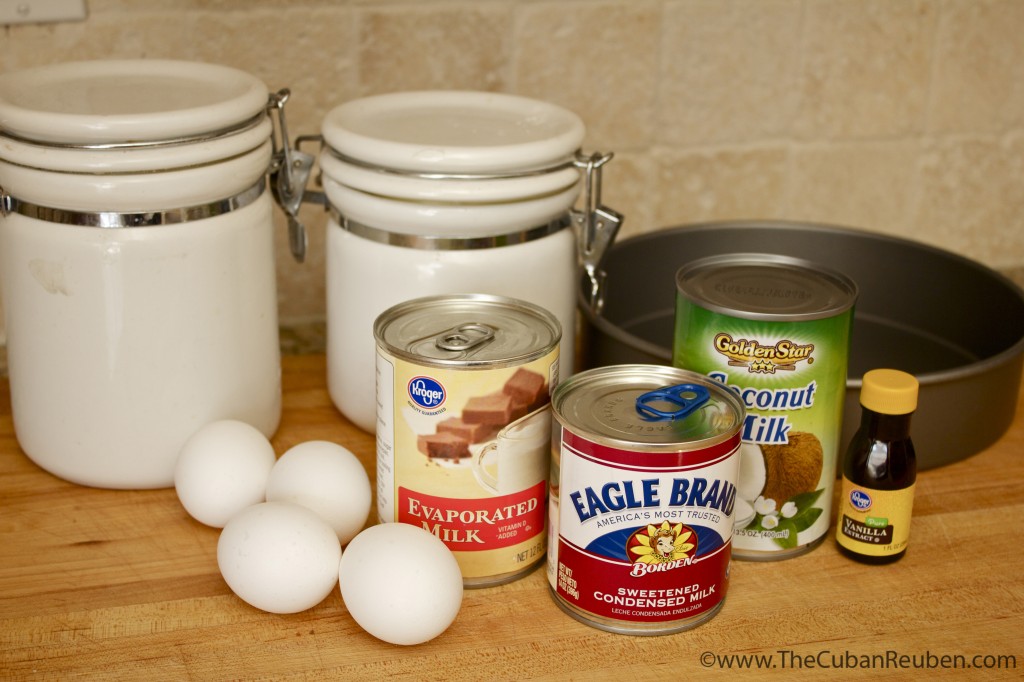 At my family get-togethers, which commonly revolve around holidays and food, there is  usually a healthy dose of competition involved. I’m not talking about the Marc Summers-hosted “Double Dare” variety, with obstacle courses and green slime, although we’ve definitely tried those in the past. These days our competitions revolve around culinary feats and there is one title that has eluded me since I joined the ranks of family cooks: La Reyna del Flan, or The Flan Queen.

Several of the matriarchs in the family have held this title in the past. My mom’s cousin, Virginia, blazed the trail with her traditional, Spanish-style flan, whose custard is so silky smooth and deeply rich, that for years, no one dared to compete. Then, Vilma, Virginia’s sister came up like a dark horse with a flan de coco (or candied coconut flan), whose strands of sweet coconut took the spotlight and threatened all we knew and loved about the traditional egg dessert. Not to be outdone, my very own mother entered the race with a super-sized pumpkin flan big enough to feed an army, or one flan-enthusiast family. But for a long time, the clear shoo-in was always my Tia Pipa, whose bread pudding flan simply could not be touched…until now.

Ladies and gentlemen, this Shavuot, I’m bringing out the big guns, as I believe I have rightfully earned my place in my family’s Cuban flan hall of fame with my latest entry. Sure, I borrowed, begged, and stole the best elements of these matriarch’s versions, but in doing so, I believe I created a flan worthy of the regal title.
When it comes to La Reyna del Flan, it looks like I take the cake…er, flan.
5.0 from 2 reviews
Flan