One of the things I miss most about my time spent living in the Midwest is the changing of the seasons. Don’t get my wrong. I understand that living in Southern California, I am certainly spoiled by the weather, but with the two options being hot and hotter, I sometimes reminisce about a cool fall breeze, or a refreshing spring shower (I don’t get too carried away about missing Chicago winters, however).

Fortunately for me, we’ve been experiencing a particularly unusual summer, and have had several days of rain. If I could hand-pick any sort of rain from the sky, it would undoubtedly be a warm summer rain. I can probably count on one hand how many times we’ve had them here in the So.Cal., but I love them just the same. To me, they act as a gentle reminder to appreciate the amazing weather we have every other day of the year. But more importantly, just as April showers bring May flowers, summer rains promise even more than the average colorful and delicious bounty of crops.

My latest venture to the local farmer’s market left me overwhelmed by the season’s harvest of crimson-colored berries, stone fruit in every hue of the rainbow, and the  techni-color array of vegetables available. And after tasting my new favorite herb, the sour-lemon-like sorrel greens at the beloved Saly Cortile Cucina a few weeks back, I was pleasantly surprised to find a bundle of such greens for the picking at my favorite stand. Traditionally, sorrel is a spring green, but with Southern California’s climate the way it is, it was a welcome find on this hot summer day. Needless to say, I left the market with my arms full of produce and the wheels in my head turning.

When I got home, I knew exactly what I’d serve alongside my grilled chicken that night. Making quick work of the strawberries and plums, I arranged them atop a generous pile of peppery arugula and the tart sorrel greens. I then whipped up a quick balsamic vinaigrette, and called it a day. Kenny gave me his stamp of approval when he went for seconds of this Summer Harvest Salad a la Jenny, and I made variations for days, only stopping when I ran out of ingredients. I can’t wait to see what else they have for my salad fixings next week!

I’ve included the basic recipe for you, but know that it is very easily adaptable. Want to make this a main dish? Add goat cheese or slivered almonds for some protein. Don’t have plums? How about fresh peaches, instead? Use your imagination, and get inspired by what you find in your garden or local farmer’s market. 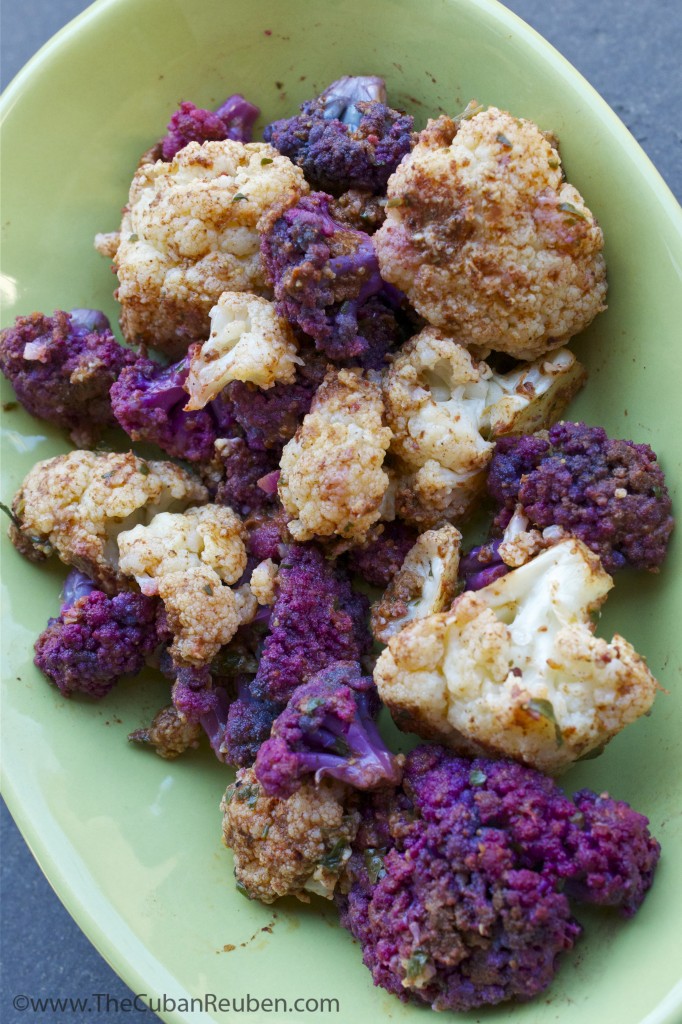 As the saying goes, you can take the girl out of the farm, but you can’t take the farm out of the girl. Such is the case with my very own mother, who grew up on a farm deep in the  countryside of Cuba. By the time she came to the U.S. as a teenager, she had already formed strong memories of farm life. My childhood was riddled with stories of how she and her family ate what they grew. They were “farm-to-table,” before it was fashionable. 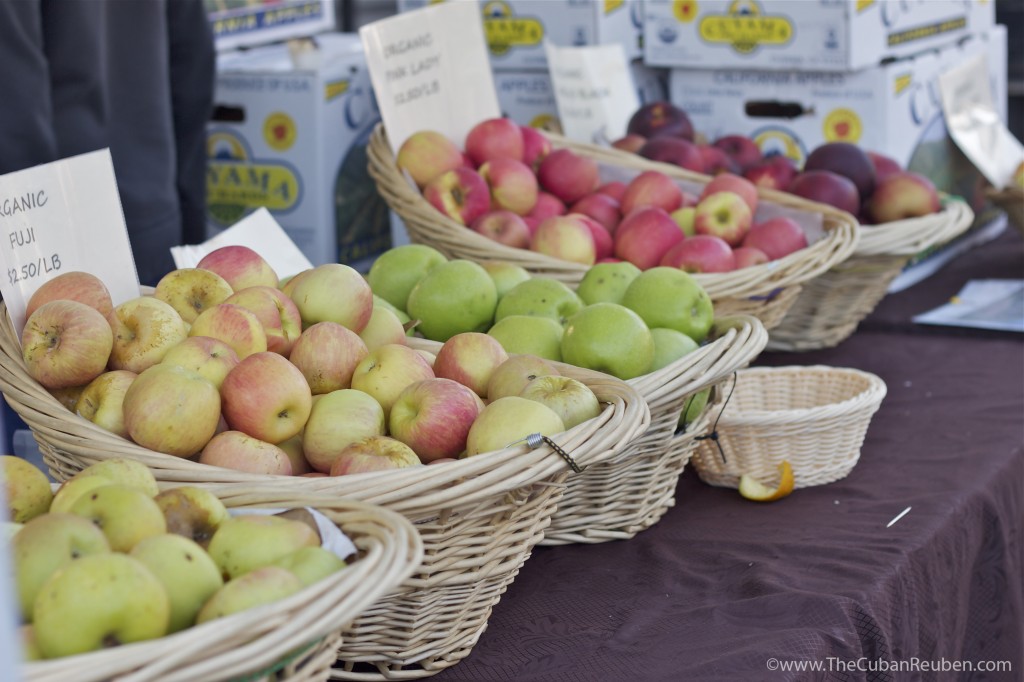 From a very early age, my mother spoiled my family with only fresh produce. Instead of a cookie jar on our counter, we had a large basket of lusciously ripe tomatoes, fragrant onions, whole starchy potatoes, or whatever was in season at the time. Despite living in a city so congested with people and buildings, my mother managed to create a produce garden along the side of our house, and we always had the freshest of meals. I only tasted canned veggies at friends’ homes, and thanked my lucky stars that my mother never prepared them in that fashion. 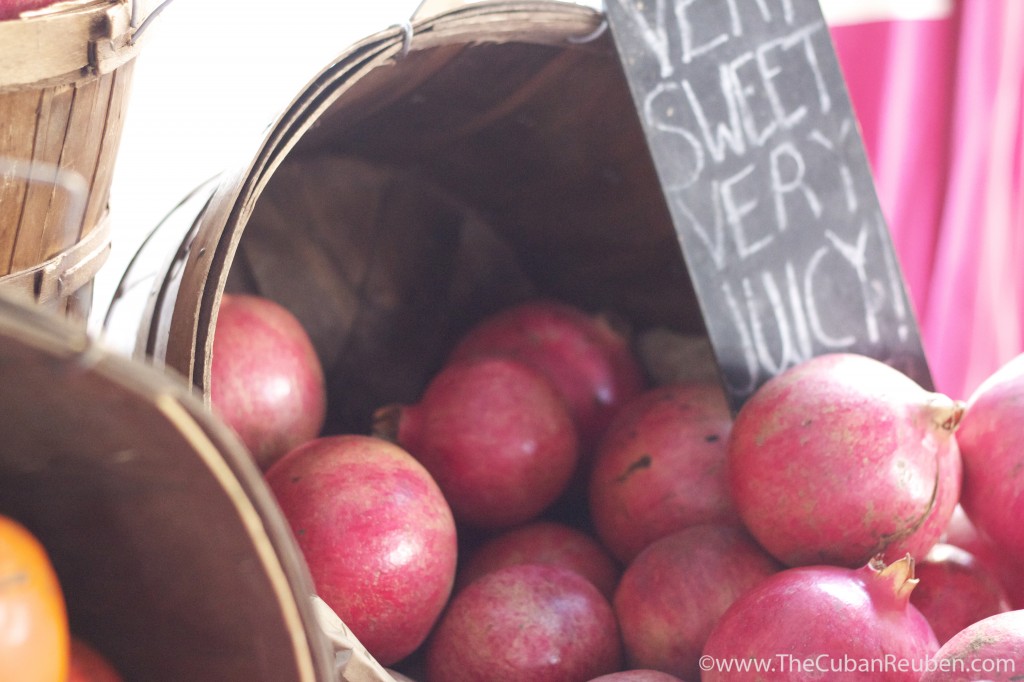 Now that I’m an adult with a home of my own, I long to create my own vegetable garden. However, there are 2 elements in my way. It appears that the green thumb gene skipped my generation, because I have a tendency to kill any plant within eyesight. That whole remembering to water situation is what kills me every time. The second issue is that my home isn’t surrounded by any land. Since I can’t grow my own garden, when I need my seasonal produce fix, and I want the best tasting produce in town, I hit my local farmer’s market.

I recently learned that in other parts of the country, farmer’s markets are only available a few months of the year. However, as California has such rich farms, bursting with produce 365 days a year, we get an outdoor congregation of local farmers all the time. I love making new discoveries at the market, and getting insightful explanations straight from the farmer’s mouths about their unique produce. For instance, on my scavenger hunt yesterday, I came upon a stand with a variety of differently colored cauliflower. There were deep aubergine ones, honey amber ones, and even classic white. I knew cauliflower came in many shades, but I had never seen one with such a peculiar hue and Northwestern pride before. Purple cauliflower? After conferring with the farmer selling this produce, I learned that it tastes the same as traditional white cauliflower. The unique color just serves to remind us that it is the actual flower of the plant we are eating, and that flowers come in all sorts of shades. 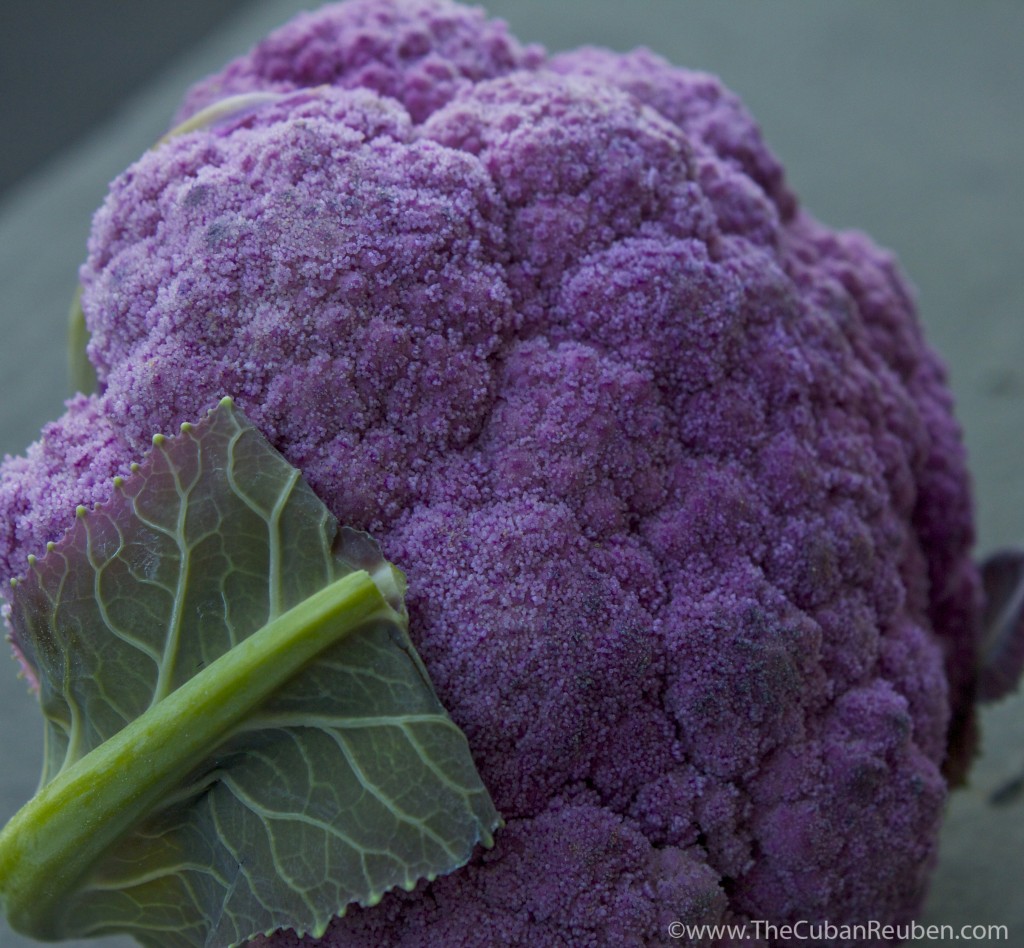 With a skeptical husband at home, I tested the farmer’s theory and took a stock home to roast for dinner. Although my husband waited to see if I curled over and died before trying his own serving of purple cauliflower, the farmer was right. Purple cauliflower is just as tasty as it’s traditional cousin. 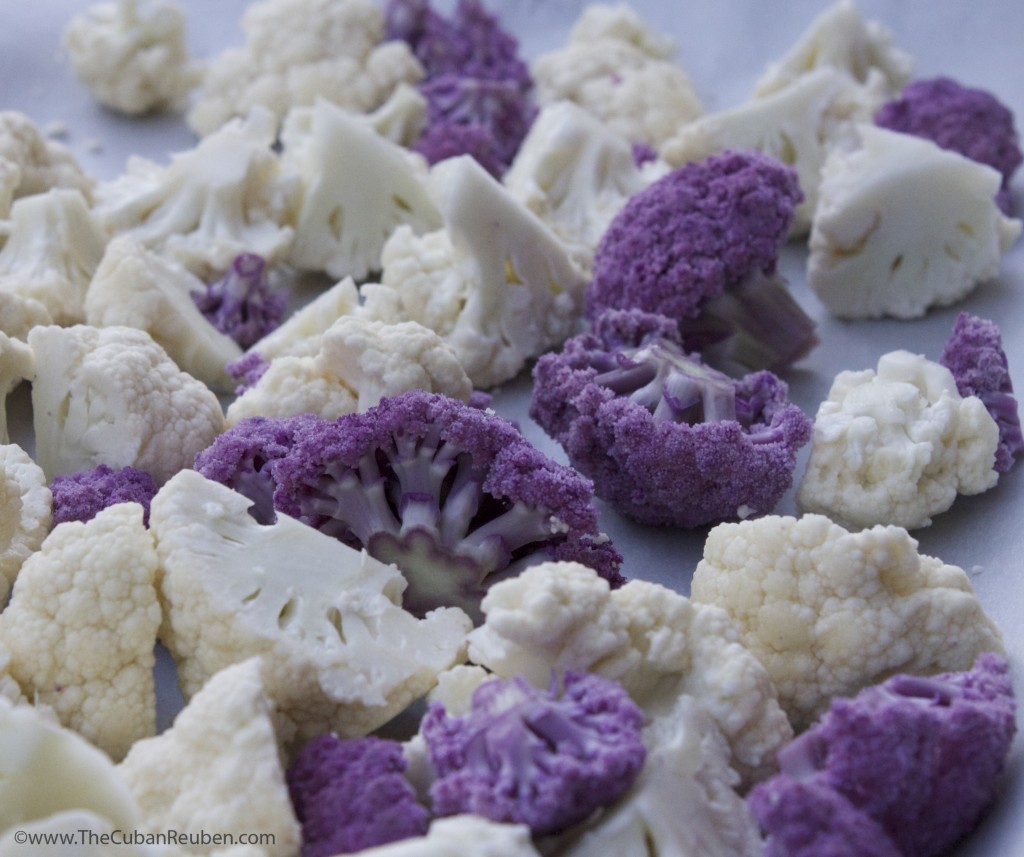